Our AGM was held in the Bell & Steelyard, Woodbridge on 10th March and after the meeting we were entertained with an excellent video about the fantastic work of the RNLI and some heart rending stories about real life rescues.

At the AGM we bid farewell to some of our outgoing members and welcomed a new committee member to the team, Chris Annett.

The new committee for 2015 is as follows:

We still could do with some extra volunteers and committee members so if you are interested in helping the Branch to carry on the excellent work we do to help the RNLI save lives at sea then please contact the Chairman or any of the committee members for more information.

• Buy your RNLI Christmas cards and gifts
• Tea, coffee and home-made cakes
• Hot dogs and burgers
• Grand draw with big prizes
• Tombola, treasure hunt etc.
• Local produce and other great stalls
• Yacht Grot
• Would you like to have a table to sell surplus yachting gear – or anything else?
• Much more besides…

The Autumn Fair is the same weekend as:
• HPYC Laying Up Supper
• Meet the Professionals
• Clarke and Carter Yacht Fair

Please contact secretary@hpyc.com or gillhm@hotmail.co.uk for more information or how to get involved. 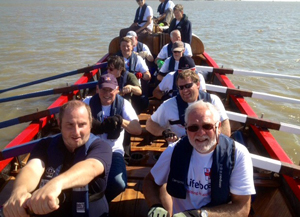 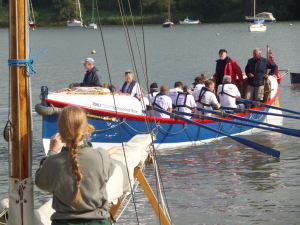 After 3 days, 48 miles, and over 20 hours rowing, we arrived at Woodbridge bang on schedule for the Maritime Festival. We rowed on 3 local rivers: the Stour, the Orwell, and the Deben with stops at Harwich, Shotley, Ipswich, Felixstowe, Ramsholt, Waldringfield and finally Woodbridge. A huge thank you to everyone who kindly gave donations to make it all worthwhile and particularly to those who came along to Woodbridge to welcome us home. If you haven’t yet made a donation and would like to do so then it’s not too late. Here is a link to our Just Giving page. And for more details and pictures you can follow us on Facebook and Twitter.

We have an album of photos of our adventure here

On 12th, 13th and 14th September members of RNLI Woodbridge Branch (and friends!) will be rowing the William Riley lifeboat on the Stour, Orwell and Deben to raise money for the RNLI.

The William Riley is a 105 year old lifeboat, which famously tried to rescue passengers from the Rohilla when she ran aground off Whitby 100 years ago – it was recently featured on the BBC programme Coast.

There will be ten rowers, two linesmen, one helm and three passengers. Suffolk Yacht Harbour, Levington, have kindly offered to act as hosts so each day will begin and end there. This is the intended itinerary (weather dependent), there will be some great opportunities for photographs with the William Riley and the current Harwich lifeboats and there be fundraising along the way. 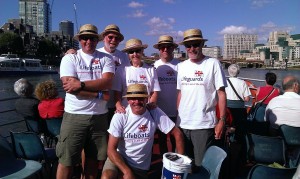 Tony Wilman, Chairman of the RNLI Woodbridge branch, decided earlier in the year that to mark the 125th anniversary of Jerome K Jerome’s book 3 Men in a Boat, he would try and get a team together to follow in George, Harris, Jerome (& Montmorency’s) footsteps to recreate the route taken by “3 Men in a Boat”.  He and two friends had completed the journey five years ago and decided this time to raise sponsorship for the RNLI.  There were 5 volunteers –  Peter Haffenden and Jason Banham who have rowed with Tony for many years would be in one boat and Tony Allwood, Julian & Cathie Taylor in another, all of whom have considerable experience on the water.

They set off on Tuesday 3rd June from Woodbridge to Lechlade for a journey that would see them cover 140 miles of the River Thames in 8 days and going through 46 locks. They hired the skiffs which came with a tent cover for the boat and basic cooking facilities and took another tent for the 3rd person on each vessel.

Instead of heading down river at Lechlade they headed for the round house which is the official start of the navigable Thames. They then turned down river and started their adventure which would end at Richmond Lock, the end of the non tidal Thames.

The rowers were invited to attend Beale Park which sits on a 7 acre lake, in time for the Beale Park Boat and Outdoor Show where they were featured in the programme and gave a demonstration on the water with the help of a lady who was on the RNLI stand.  There was such interest in the skiffs and the cause that they managed to raise over £150 on this day alone.

From Beale Park they rowed to Henley and then onto Windsor and Chertsey and completed their row on Tuesday 10th June in Richmond. All equipment, boat hire, food and drink was paid for out of their own pocket with all monies raised going to the RNLI.  The total raised currently stands at £1288.56 and there are still donations coming in, they would like to thank all those who have contributed so far and for all their support along the way.  If you would like to donate please visit http://www.justgiving.com/RNLI3meninaboat

Our AGM was held in the Bell & Steelyard, Woodbridge on 27th March and after the meeting we were entertained with an excellent talk/presentation given by Anthony Mason, our Branch Talks Officer.
A new committee was elected and we now have a new Chairman, Tony Wilman, a new Box Secretary, Alan Whitfield, and a new PRO, Caroline Wilman. As well as Caroline, we also welcomed new committee members, Shona Hardie and Peter Haffenden.
A huge thanks to our outgoing Chairman, Len Graves, for all the hard work he has put in over the last 2 years – he has made a big difference to the Branch. Happily, Len is continuing on the committee.

The new committee is as follows: 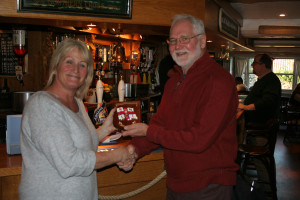 On Friday 22nd November the RNLI Supporters Award was presented to  Steve and Louise Lomas, owners of the Deben Inn chain of pubs/restaurants in Suffolk by Tony Wilman, Vice Chairman and Box Secretary of the Woodbridge Branch of the RNLI. The award of a shield was given for raising substantial funds for the RNLI and the Aldeburgh lifeboat station through the lifeboat collection boxes held in each of their pubs.  The RNLI is a cause close to Louise’s heart; she had an uncle who spent many years on the Aldeburgh lifeboat saving lives at sea.